I have always enjoyed building things, I do not get to do it as often as I would like as it does take time and money. Here is some of my completed projects.

I have a few completed projects right now and have a few others in the works. As these are just hobbies for me the get do as my time allows. Recently I have acquired some new space and tools, so I may have a few more projects coming out, though mostly woodworking as the metal shop is still in need of setup time.

I am currently working to complete a bed base with drawers on one side for now with a design that they could be added to the other side later. I will add photos when I get a chance to take them. 10/28/2019

The first one is a table that I designed and build for use with my gaming hobbies. This table is four feet by three feet. The frame is one and one half square by one eighth inch wall steal tube. The top is a piece of three quarter inch MDF. The legs are the same as the frame and capped on the bottom end. They are attached with two bolts through some two inch square by one quarter inch steal tube. All joints are welded. They are not light to move, but they will take anything you put one them and don’t wobble if some one bumps them. 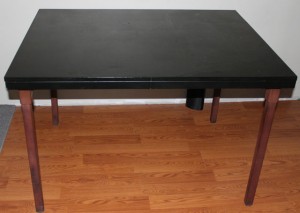 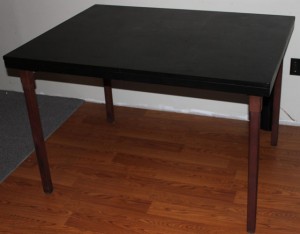 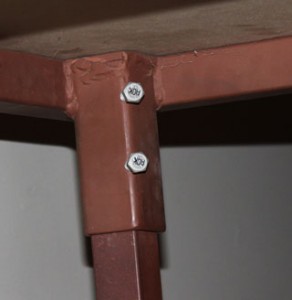 The second project was a copy of the totalgym system I built for myself with the help of my father. This one is made a little stronger then the one you see on TV. It is also very heavy to move around.

I have a ruff rolling table built that I am using for project to be able to stand at. Just basic 2×4 frame and the tops are some old prefinished ones that were around the house. I velcroed them on as if they were not removable I would not be able to get though the house.

A place to keep tracked of things.